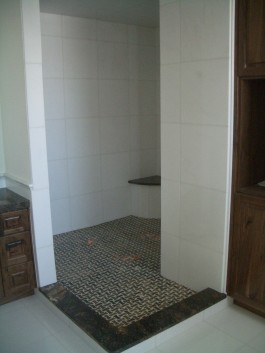 We recently finished up a master bathroom in Berthoud, Colorado. The entire bathroom was built from the studs out. The main feature of this bathroom is the huge shower – it’s 5 feet by 8 feet!

The entire shower was waterproofed with Schluter Kerdi. The bench and top of the curb has kerdi-board. This is a lightweight waterproof substrate which can be used for the walls as well as any features in the shower you need waterproofed.

Once all the waterproofing was installed we did a flood test to ensure that the shower did not leak. To flood test a shower floor the drain is plugged and the entire shower floor is filled to the top with water. It is left in the shower for 24-72 hours. Once it is determined the shower does not leak it is ready for the tile installation.

The homeowner chose a marble mosaic in dark brown (emprador marble) with small white squares. They also picked out three ceramic koi inlays they wanted cut into the marble mosaics and circling the drain. The mosaics needed to be taken apart and each custom cut to 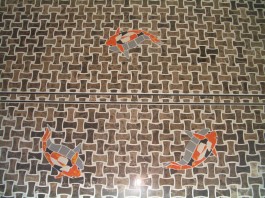 have a seamless transition into the inlays. Since the inlays were not as thick as the marble mosaics we also needed to build up the floor substrate beneath the inlays to have a flush plane with the two different tiles.

The linear drain, made by Pro-Line, spans the width of the shower. It is the ’tile-in’ grate, which means that the same tile is inserted into the grate of the drain to make it nearly invisible once installed. With smaller mosaics care needs to be taken to ensure the mosaic pattern flows seamlessly through the drain.

The walls and ceiling of the shower have 18 x 18 White Thassos marble, as well as the bathroom floor and wainscot. We used matching stone for the six shelves in the shower (three in each opposite corner) as well as the top of the corner bench, curb and vanity tops.

A wainscot was install around the entire bathroom and capped off with a marble chair rail. The wainscot flows up and across the vanity tops to create a backsplash for the countertops. Walnut vanities were installed with natural stone vessel sinks. The shower has two shower body spray panels installed.

The entire installation was finished off with Laticrete SpectraLOCK epoxy grout. Epoxy grout is virtually stainproof and aids tremendously with tile and grout maintenance. The shower will not have a door and instead will have a stained glass panel installed on the left side of the curb from the top of the curb to the ceiling. We will have final photos once the entire bathroom is complete.

If you have been planning on that dream bathroom and need a tile or stone contractor in Berthoud, Fort Collins, Loveland or any part of Northern Colorado give us a call at 970-213-3682 or just fill out our Contact Form and let us help you bring your vision to life!.

You may click on any of the photos below for a full-size version.