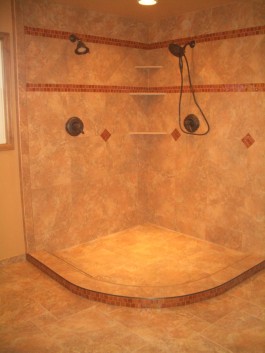 We recently finished up a master bathroom remodel in Fort Collins.  The previous bathroom was outdated and the room made much smaller with walls and divisions, the tub and shower on opposite sides of the room, white builder’s grade tile and, of course, the huge ‘mirror wall’ above the vanity – presumably to give the illusion of a much larger room. It wasn’t needed – the room is fairly large, it just needed to be opened up and updated.

The homeowner demolished the existing bath and tile and when we began we started with a large, blank room torn down to the studs. After moving some plumbing and getting everything where it needed to be we began by building up the flooring substrate with a double layer of 3/4″ plywood.

Given the spacing of the floor joists and the double layer of substrate we ended up with a nice, solid floor that didn’t ‘bounce’. The strength of the floor, or the limited ‘bounce’ is called the deflection ratio of your floor. (There is much more to it than that – but that essentially describes what we are attempting to limit.)

Once the floor was nice and solid we installed Suntouch in-floor heating. The heating element was also continued into the shower floor so it is heated as well. We also ran the element up into a portion of the wall cavity which we insulated and lined with cement backerboard. I’ll tell you why in a bit. 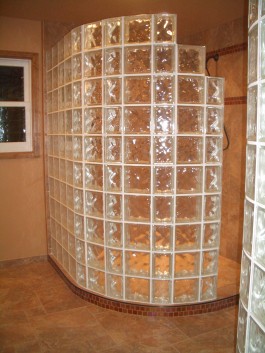 This allows you to use any tile you wish on the floor without size limitations – the tile does not need to conform to a slope. In this case we used the same 18 x 18 and 6 x 6 inch tiles in a pinwheel pattern as is on the entire bathroom floor. If you choose the linear drain with the ’tile-in’ option for the grate the same tile can be inserted into the cover and the drain will nearly disappear.

We also wanted to utilize a curved glass block wall as the outside wall of the shower. The curved shower curb was created around the outline of the shower and topped with the same Taconic Slate porcelain tile. The inside and outside of the curb has Solstice Amber 1 3/8″ mosaic glass tile. The same Solstice glass was used throughout the bathroom as an accent.

Another smaller matching curved curb was built opposite the shower on which we would install a smaller glass block wall for a separation around the toilet. This method opened up the entire room and divided it into the separate areas without losing any of the feel for the size of the room. It was still a very large room, and still felt like it, but it was divided into the individual areas without feeling closed off.

The floor was tiled in a pinwheel pattern (which was continued onto the shower floor) with the 18 x 18 and 6 x 6 inch porcelain. One half of the entire room was tiled floor to ceiling with 12 x 12 matching Taconic Slate Red Ridge tile with the Solstice Amber glass in a diamond accent around it. The glass was also used in two accent rows on both the top and bottom of one row of porcelain turned diagonally – what we call ‘on-point’. (It’s actually ‘en-pointe’, but I’m not French – my tongue hurts when I say that).

The Schluter linear drain was placed at the end of the shower, behind the curb at the bottom of the curve. The shower floor slopes from the back wall down to the drain behind the curb at the glass block wall. The curbs were topped off with Schluter oil-rubbed bronze trim at the outside and inside edges to give it a clean, finished look. 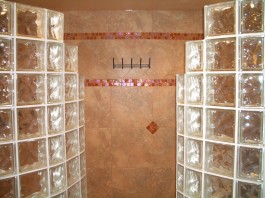 The last thing we did was install the two curved glass block walls around the shower and toilet. The glass block is standard 8 x 8 inch block with 4 x 8 inch ‘arque’ blocks. The Arque blocks have a 22.5 degree angle which allowed us to step the curve around in a smooth line with consistent grout lines. The bathroom was finished with oil-rubbed bronze fixtures, two small vanities (and small mirrors) and oil-rubbed bronze hardware.

The towel rack you see on the back wall between the two glass block walls is the spot in which we placed the heating cables – a built-in towel warmer. A feature exclusive to Tile Art in Fort Collins – until I post this, anyway. Feel free to steal it, just remember you heard it here first.

If you need a tile installer in Fort Collins for a new master bathroom remodel or glass block installation just give us a call at 970-213-3682 or fill out our contact form and Roger will contact you to discuss your project.

You may click on any of the images below for a full-size version. A box will pop up in the middle of the screen with the images and you can use your left and right arrow keys on the keyboard to flip through them.