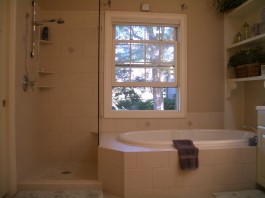 I just finished up a complete Kerdi shower installation in Fort Collins, CO. The homeowner initially called me due to some swelling around the end of the tub along the shower wall. Upon further inspection we discovered that  area (the half-wall) was not properly waterproofed and the moisture migrating behind the tile started to soak into the framing causing it to swell.

This scenario is unfortunately all too common. A very large percentage of bathroom remodels begin with a leaking or swelling shower substrate which was improperly built. Once the half wall was removed it was apparent that the rest of the shower was not waterproofed either. We ended up replacing the entire shower and tub deck.

We also added a tiled shower floor rather than the acrylic pan used initially. Once the acrylic pan was removed the shower was slightly enlarged and waterproofed with Schluter’s Kerdi membrane. We then purchased matching tile to tie the entire installation back into the wall tile around the tub deck (which was not removed) and the homeowner added a frameless glass shower enclosure.

In addition to the frameless glass we added three corner shelves inside the shower as well as a small ‘shaving’ shelf in the corner of the half wall. Women who have these love them! Women who don’t have one want one – go ahead, ask her.

I used corner shelves rather than a built-in niche because the back wall of the shower is an exterior wall. The climate in Northern Colorado does not lend itself to building shelves in exterior structure wall cavities. Frozen shampoo is difficult to get out of the bottle – and it’s cold!

If you need a custom shower tile installation in Fort Collins, or anywhere in Northern Colorado, just give us a quick call at 970-213-3682 or fill out our contact form and we will take a look at your project for you. Oh – and ask her about the shaving shelf – I’m serious. I dare you!

You can click on any of the images below for a full-size version. 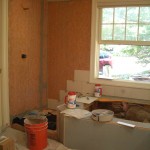 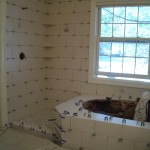 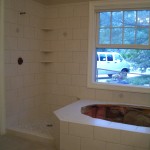 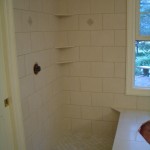 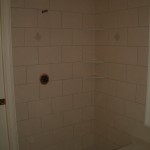 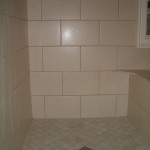 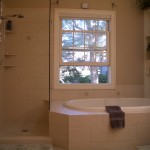 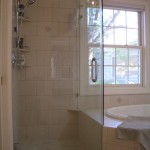 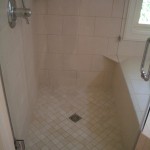 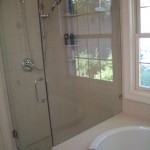 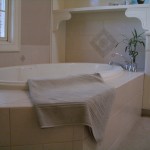 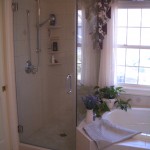 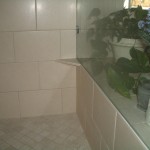 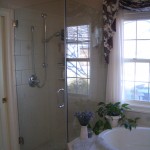 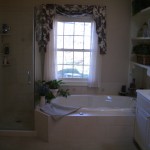