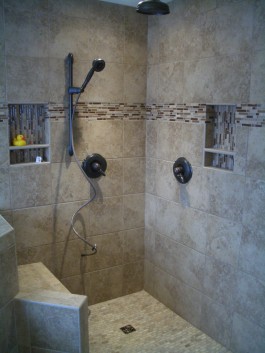 I recently finished a master bathroom shower remodel in Fort Collins. The existing shower was starting to show signs of some potentially serious problems. Small details such as cracking grout or tile movement are certain signs of water getting into places water should not get.

The homeowners decided to use the same tile to continue the flow of the jetted tub surround and add a few additional elements to the shower such as a glass liner, built-in niches, and frameless glass.

Beneath the tile is a fully waterproofed substrate utilizing the Schluter Kerdi membrane. Kerdi is a thin polyethylene sheet with a bonded fleece which, when properly installed, prevents the problems which led to this particular remodel.

The shower floor is a running bond or ‘brick’ pattern travertine tile. The main tile on the shower walls is the same chiseled edge porcelain running around the jetted tub surround and face.

The wall between the shower and tub was removed and turned into a 1/2 wall or ‘pony’ wall with an attached bench on the shower side. This opened up the back half of the master bath and made the shower look much, much larger than it did initially. A small change such as removing part of a wall can make your shower look nearly twice as large.

There is one ‘rain’ shower head coming out of the ceiling and the other regular shower head in the wall was replaced with an adjustable shower arm with a removable shower head. Each shower head has a dedicated control. All of the shower trim is oil-rubbed bronze as well as the Kerdi shower grate on the drain.

If you need a master bathroom remodel, or just the shower, in Fort Collins, Loveland, Greeley, or any other part of Northern Colorado just give us a call or fill out our Contact Form and let us give you the shower you’ve always wanted.

You may click on any of the photos below for a full-size version. There is also a time-lapse photography / movie at the bottom showing the entire remodel from start to finish. 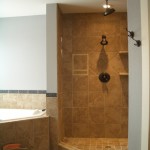 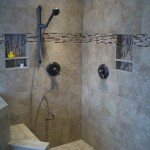 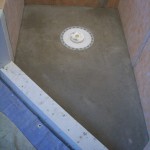 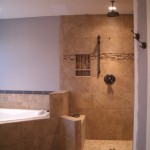 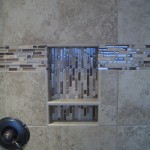 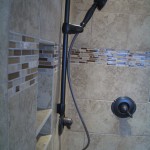 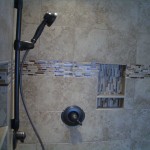 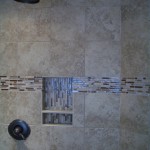 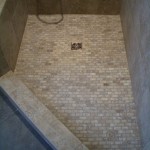 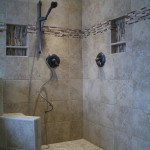