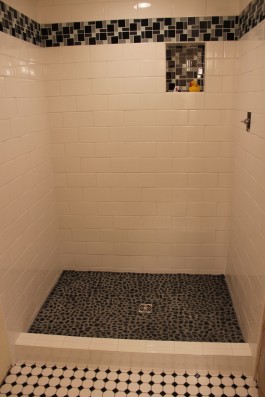 We recently completed a subway shower with river rock on the shower floor and hex tile on the bathroom floor.

The shower was waterproofed with Schluter Kerdi-board. Kerdi-board is a waterproof polystyrene tile substrate with the kerdi membrane bonded to it. It is installed in lieu of cement backerboard or other shower substrates. The tile is bonded directly to the Kerdi-board.

The shower floor has the Schluter Kerdi-drain and is waterproofed with the Kerdi membrane.

The shower walls have handmade ceramic subway tiles with a geometric glass accent band running throughout towards the top. We built a niche in the back wall and used the glass accent tile in the back of it to make it stand out.

The shower floor is black rounded river rock. Before deciding on river rock for your shower floor you should get a sample and walk on it with your bare feet. Some people like it, some can’t stand it. Be sure to test it out before having it installed.

You can also get river rock mosaics with a flat top rather than rounded. It is nearly the same look with a flat surface which is not so harsh on bare feet.

The bathroom floor is 2 inch hexagon tiles with a small black diamond accent. It’s a classic look that really blends well with a subway patterned shower.

You may notice in a few of the photos an orange strip on the ceiling to the left. The original shower was 18″ smaller, we expanded the size. It is common for builders to place a ‘dummy wall’ at one end of a shower with only empty space. It’s due to the size of pre-fabricated acrylic shower bases. They purchase the base, build the frame to fit the base and wall it off.

If you happen to have a five-foot wide bathroom and your shower is smaller, you may have empty space behind a wall which can be removed to expand the size of your shower. Although it’s only 18″ larger, it really makes the shower feel almost twice as large.

If you need a custom shower for your home just give us a call or fill out our contact form. You may click on any of the photos below for a full-size version.

Next post: Join us for our New Year’s Remodel Resolution!